A few years ago, I investigated an incident involving a fire that resulted from the transfer of a flammable liquid mixture. A driver of a chemical supplier was delivering a load of product to a customer. The product consisted of a solvent solution containing toluene and other flammable ingredients. As the driver was filling a 350-gallon metal (tote) container from a top nozzle, a fire suddenly erupted, causing burn injuries to the driver. He suffered second- and third-degree burns to about 20 percent of his body. 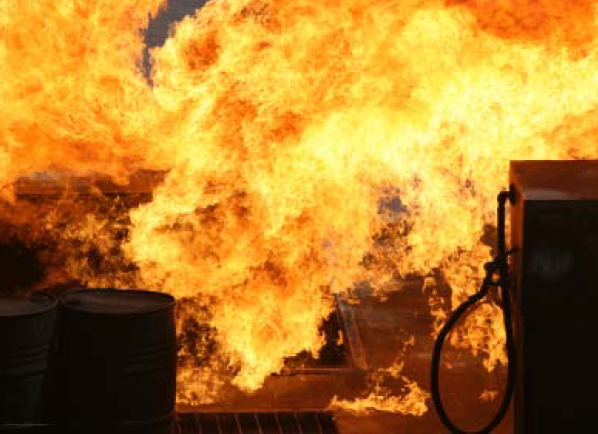 The investigation of this incident determined  that a spark, resulting from static discharge, ignited the solvent vapors. There are two basic techniques to protect against the dangers of  static electricity – grounding and bonding. These techniques should be strictly followed in areas where flammable and combustible liquids are stored, dispensed or used. This article describes how static discharge occurs and how bonding and grounding help prevent potential fires due to electrostatic discharges.

Static Electricity
Static electricity results from the interaction of dissimilar materials . This can occur when materials are rubbed together, such as in the classic example of walking across a carpet on a dry winter day while wearing woolen socks. However, static discharges can also develop when a liquid passes through a pipe, through an opening into a tank, and/or when mixing or agitating the mixture. The liquid is moving different electrons from one to another, and the friction of electrons creates static electricity.An electrostatic discharge (also called a static spark) is a discharge of electricity across a gap between two points not in contact, resulting from a difference in electrical potential. The spark produced when the electrical charge jumps across the gap usually contains enough energy to ignite flammable vapors if they are in concentrations that will sustain combustion. The generation of static electricity cannot be totally eliminated because it is normally present at every interface. However, there are ways to reduce the potential for static charge build-up when transferring flammable liquids. The two most important ways to prevent static sparks are~ bonding and grounding. 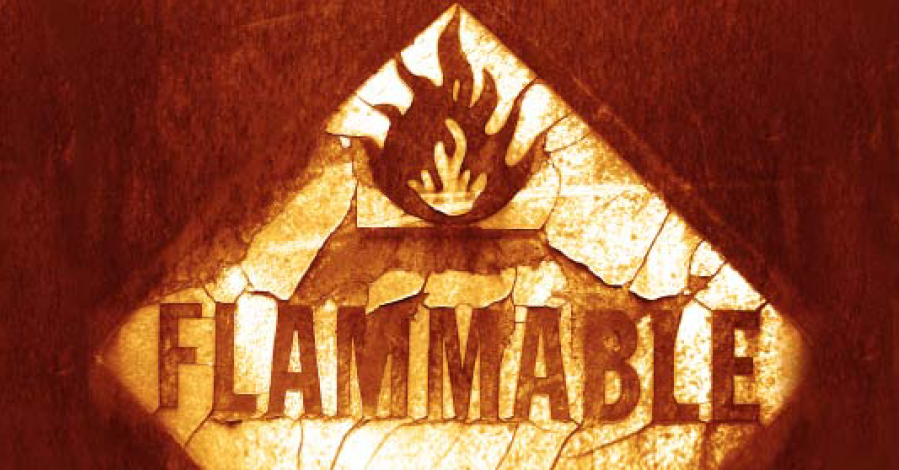 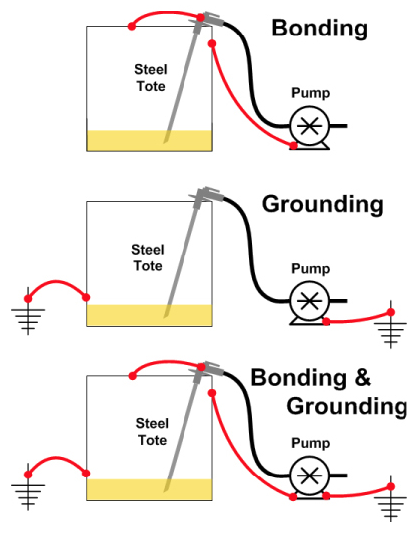 Bonding can be accomplished by attaching a conductive wire between the objects. The following are important factors for safe bonding:

Size of bonding wire: The size of the bonding wire is based on mechanical strength rather than on current-carrying capacity. Use a heavy 12-gauge, stranded wire that can stand up to continuous use. Bonding wires are available on reels or in individual specified lengths from industrial suppliers.

Attachment point on both objects: The attachment point on both objects must be solid and secure and should be on a bare metal surface. Using a pressure clamping device (screw-on or spring-loaded) is a good way to ensure a positive connection. The connection must be made prior to beginning the transfer of material between the containers. If the bonding is done after the transfer, the static charge build-up could result in a spark as the bond wire is connected to one of the containers. 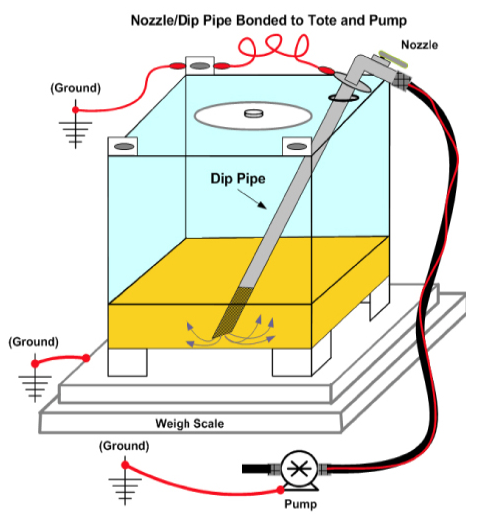 Grounding an object serves a different purpose than bonding. Bonding eliminates the difference in electrical potential between containers that are bonded together, but it will not eliminate the potential difference between an object and the ground. To ensure that a static charge will not create a spark as a result of this difference, a conductive path must be provided to the earth. A proper ground will provide a means for continuously discharging a charged, conductive body to the earth.

Grounding may be achieved by attaching a wire conductor between the container and a water pipe or the full length of an 8-foot long copper clad steel rod embedded in the ground. Total resistance to ground should be kept below one mega-ohm. When using a buried rod, resistance is affected by soil moisture. It is important that the grounding system be checked to ensure that there is continuity and proper resistance.

Rate of Static Discharge
Electrical charges can build up in flammable liquids when the liquids flow through piping systems or when they are agitated in their storage containers as a result of mechanical movement or splashing. The proper bonding and grounding of the system is often enough to control this static build-up. However, if rapid flow rates are used to transfer the liquid into a storage tank or container, high electrical potentials can occur on the surface of the liquid in the tank.

The rate of accumulation of static charge may be much greater than the liquid’s ability to transfer it to the grounded metal storage vessel. If the accumulated charge in the container builds up enough, a static spark may result when the liquid level approaches a body with a different potential. This kind of static situation can be controlled by reducing flow rates, avoiding violent splashing in the tank, and allowing for time until the static charges dissipate. Splash filling can be avoided by using a fill pipe designed in accordance with NFPA 77.

In Review
In review of the incident described earlier, the driver failed to connect the bonding cable to the metal container. The driver also created a high rate of static discharge due to the product’s splashing during filling. These errors may be due to lack of training, lack of company procedures, and/or lack of enforcement and management oversight. The container also did not have a proper ground. However, the container belonged to the customer and was located at the customer’s site. When transferring flammable materials at a multi-employer worksite, some planning and coordination may be necessary to ensure that safe bonding and grounding practices are followed.

Additional guidance for controlling static electricity may be found in NFPA 77, Recommended Practice for Static Electricity.