Chromium has been used commercially in the U.S. for more than 100 years. Chromium occurs mainly in three forms, described by its valence state. Metallic chromium (Cr[0]) is a steel-gray solid with a high melting point that is used to make steel and other alloys. Chromium metal does not occur naturally but is produced from chrome ore. Trivalent chromium (Cr[III]) occurs naturally in rocks, soil, plants, animals, and volcanic emissions.  Cr(III) is used industrially as brick lining for high-temperature industrial furnaces and to make metals, metal alloys, and chemical compounds. Cr(III) is also believed to be an essential nutrient but in only trace amounts. Most diets tend to be deficient in Cr(III).  Hexavalent chromium (Cr[VI]) occurs through the oxidation of chromium compounds with lower valence states. Cr(VI) is considered the greatest occupational and environmental health concern, as it is the most toxic. Other valence states are unstable so they are less common. They will most likely be quickly converted to either Cr(III) or Cr(VI).

Chromium metal is found in stainless steel and many low-alloy materials, electrodes, and filler materials.  The chromium that is present in electrodes, welding wires, and base materials is in the form of Cr(0).  Therefore, welders do not ordinarily work with materials containing Cr(VI).  But rather, the high temperatures created by welding oxidize chromium in steel to the hexavalent state.  The majority of the chromium found in welding fume is typically in the form of Cr2O3 and complex compounds of Cr(III).  Some of the metal oxides in its hexavalent form are also in the form of CrO3. Pure CrO3 is extremely unstable; however, other metal oxides, especially alkali metals, tend to stabilize Cr(VI) compounds (Fiore, 2006).

Welding fume is a complex mixture of metal oxides. Fumes from some processes may also include fluorides.  The predominant metal fume generated from mild, low alloy, and stainless steel welding is iron oxide. Oxides of manganese are also typically present.  Fumes from stainless steel and some low-alloy steel welding also typically contain chromium and nickel.  Chromium is typically not intentionally added to mild steels or mild steel consumables but due to the use of scrap steel in the steel production process, some low levels of chromium metal may be present.  However, in most mild steel welding, the exposure limits for fume constituents other than Cr(VI) (such as manganese) will be exceeded before the PEL for Cr(VI) is reached (Fiore, 2006). 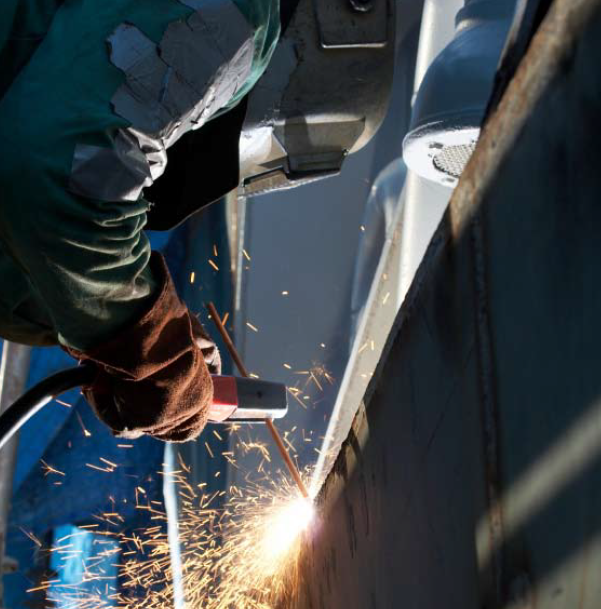 Shielded Metal Arc Welding (SMAW, “stick welding”) is commonly used for mild steel, low alloy steel, and stainless steel welding.  In SMAW, the electrode is held manually, and the electric arc flows between the electrode and the base metal.  The electrode is covered with a flux material, which provides a shielding gas for the weld to help minimize impurities.  The electrode is consumed in the process, and the filler metal contributes to the weld.  SMAW can produce high levels of metal fume and fluoride exposure; however, SMAW is considered to have little potential for generating ozone, nitric oxide and nitrogen dioxide gases.

Gas Metal Arc Welding (GMAW) is also known as metal inert gas (MIG) welding. GMAW is typically used for most types of metal and is faster than SMAW.  This process involves the flow of an electric arc between the base metal and a continuously spool-fed solid-core consumable electrode.  Shielding gas is supplied externally, and the electrode has no flux coating or core. Although GMAW requires a higher electrical current than SMAW, GMAW produces fewer fumes since the electrode has no fluxing agents.  However, due to the intense current levels, GMAW produces significant levels of ozone, nitrogen oxide, and nitrogen dioxide gases.

Fluxed-Cored Arc Welding (FCAW) is commonly used for mild steel, low alloy steel, and stainless steel welding.  This welding process has similarities to both SMAW and GMAW.  The consumable electrode is continuously fed from a spool and an electric arc flows between the electrode and base metal.  The electrode wire has a central core containing fluxing agents and additional shielding gas may be supplied externally.  This welding process generates a substantial amount of fume due to the high electrical currents and the flux-cored electrode.  However, FCAW generates little ozone, nitric oxide, and nitrogen dioxide gases. 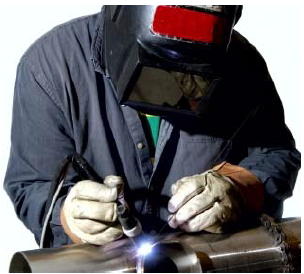 Submerged Arc Welding (SAW) is another common welding process used to weld thick plates of mild steel and low alloy steels. In this welding process, the electric arc flows between the base metal and a consumable wire electrode; however, the arc is not visible since it is submerged under flux material.  This flux material keeps the fumes low since the arc is not visible.  There are also little ozone, nitric oxide and nitrogen dioxide gases that are generated.  The major potential airborne hazard with SAW is the fluoride compounds generated from the flux material.

The primary sources of information when determining the components likely to be in the fume is the Safety Data Sheet (SDS) and/or the manufacturer’s technical data sheet of the consumable electrode/wire.  About 90 to 95 percent of the fumes are generated from the filler metal and flux coating/core of consumable electrodes (Lyttle, 2004).  Since the base metal weld pool is much cooler than the electrode tip, the base metal contributes only a minor amount of the total fumes.  However, the base metal may be a significant factor of the fume exposure if the metal or surface residue contains a highly toxic substance (such as chromate-containing coatings, lead-based paint, etc.).

In addition to the welding process, studies have shown that the FGR is also influenced by the following factors: 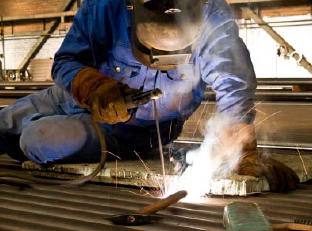 In general, FCAW produces the greatest fume generation rate (for mild steel) and is closely followed by SMAW.  However, when welding chromium-containing steel, Cr(VI) contained in the fumes generated from SMAW tends to be greater than Cr(VI) generated from FCAW.  Alkali metals, such as sodium and potassium, stabilize Cr(VI).  These metals and are often SMAW electrode coatings and may also be present in FCAW flux (Fiore, 40), which may explain why Cr(VI) concentrations from SMAW operations are often higher than Cr(VI) concentrations from FCAW.  GMAW tends to have a moderate relative fume generation rate.  GTAW and SAW are inherently low fume generating processes.

Other ancillary process (such as air arc gouging and plasma arc cutting) can also generate a significant amount of fumes and gases (e.g., carbon monoxide, ozone, etc.) due to the high electrical current and arc voltage associated with these processes.  Potential exposures to not only the operator but also other personnel in the work area can be significant from such processes, especially in enclosed and confined spaces.  Few research studies are available that examine potential Cr(VI) exposure associated with air arc gouging and plasma cutting operations. 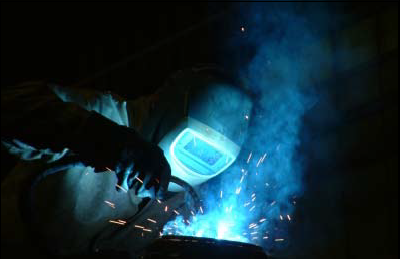