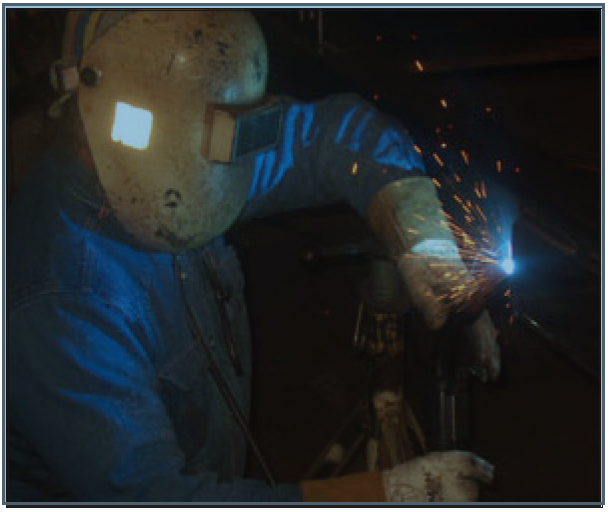 Exposure monitoring should be performed using a sampling method that is at least ±25% accurate. OSHA specifically references exposure monitoring to be performed using OSHA Method ID-215 (or equivalent). This method involves collecting an air sample onto a 5.0 micron polyvinyl chloride (PVC) membrane mounted in a 37-mm or 25-mm polystyrene cassette holder. The recommended flow rate is 2.0 liters per minute for 480 minutes (i.e., 960 liters). NIOSH Analytical Method 7605 is comparable to OSHA Method ID-215.

Sampling Inside vs. Outside the Hood

OSHA ID-215 does not address the sample location or position other than the cassette should be in a vertical position with the inlet facing down. Breathing zone sampling location during welding fume exposure assessments has been a subject of discussion for several years. Goller and Paik (1985) described the results of simultaneously air sampling with collection sites at four locations – the welder’s body, the left front shoulder, the right front shoulder, the front chest, and inside the helmet. A total of 40 sets of four samples on each welder at each of these locations were collected. The welders monitored were using flux-cored arc welding (FCAW) while building railroad locomotives. Goller and Paik concluded that fume concentrations inside the helmet were 36% to 71% of those measured outside the helmet (Goller and Paik 92), which supports the protocol of sampling inside the helmet recommended by the American Welding Society (AWS).

Liu et al. (1995) showed that the relationship between sample location and measured contaminant may not be as clear as earlier believed. A total of 20 volunteers performing shielded metal arc welding (SMAW) in a controlled laboratory environment were monitored. A total of 23 sample sets was collected from both the breathing zones inside the helmets and at the shoulders of 20 volunteers who welded inside a 506 ft3 test chamber. The results of this monitoring indicated there was generally little difference between fume concentrations inside the helmet and those outside the helmet (Liu et al. 283).

More recently, Harris et al. (2005) supported the findings of Liu et al. (1995). As part of a larger study, the researchers examined airborne concentrations of manganese and total fume during SMAW inside a 2,194.5 ft3 test chamber for different electrodes and different ventilation rates. Harris et al. concluded that in more restricted work environments (such as fabricating structures that include enclosed or restricted spaces such as ships, tubs, barges, petroleum and chemical processing equipment, or offshore platforms), fume concentration distribution may be relatively uniform and with little difference between concentrations inside and outside the helmet (Harris et al. 380).

OSHA requires that if objective data is used, the conditions must closely resemble the workplace conditions that the data represents. This attempts to address the environmental variability to some degree. The primary strategy to control for environmental variation should be to define and categorize exposure determinations by Similar Exposure Groups (SEGs). Consider exposure factors when defining and categorizing SEGs. Such exposure factors include the welding process, chromium content in the welding wire, chromate coatings on the base metal, welding rate, welding position, use of local exhaust ventilation, welding environment, general/dilution ventilation and natural air currents, and other welding (or allied processes) performed in the area.

Professional judgment may be necessary along with relevant sampling data (if available) to prioritize data collection needs based on potential exposure levels. For example, down-flat welding is expected to result in higher exposures than vertical welding positions, all else remaining equal. Also, FCAW and SMAW are expected to result in significantly higher exposures than gas tungsten arc welding (GTAW) and submerged arc welding (SAW).

For those SEGs with minimal exposures, only a few samples may be needed to justify and document that exposures are below OSHA’s Action Level. The primary focus should be on collecting sufficient data to characterize those SEGs with a higher exposure risk.

OSHA’s lead standards for construction and general industry are the only Federal OSHA standards that require PEL adjustments with respect to extended work shifts. The PEL for Cr(VI) is based on an 8-hour TWA. To minimize errors and assumptions associated with fluctuations in exposure, conduct representative fullshift sampling for air contaminants when determining compliance with an 8-hour TWA. OSHA’s Technical Manual defines full-shift sampling as a minimum of the total time of the shift less one hour (e.g., seven hours of an eight-hour work shift or nine hours of a 10-hour work shift).

The first approach is to sample what is believed to be the worst continuous 8-hour work period of the entire extended work shift. The second approach is to collect multiple samples over the entire work shift. Sampling is done so that multiple personal samples are collected during the first 8-hour work period and additional samples are collected for the extended work shift. The employee’s
exposure (for OSHA compliance purposes) in this approach is based upon the worst eight hours of exposure during the entire work shift. Using this method, the worst eight hours do not have to be contiguous. For example, for a 10-hour work shift, ten one-hour samples or five two-hour samples could be collected and the eight highest one-hour samples or the four highest two-hour samples could be used by the compliance officer to calculate the employee’s eight-hour TWA, which would be compared to the 8-hour TWA-PEL.

Other organizations and regulatory standards suggest different protocols for addressing extended work shifts. For instance, in California, Cal-OSHA requires the 8-hour TWA to be calculated using the following formula (in accordance with CCR, Title 8, Section 5155):

where, T is the duration in hours of the exposure to a substance at the concentration C. Eight (8) is used as the denominator regardless of the total hours of the work shift. 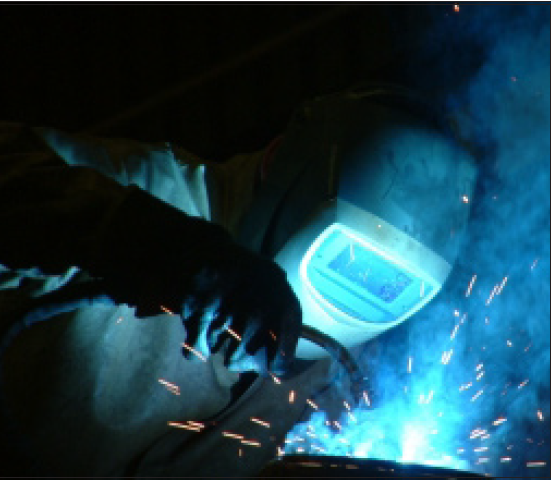 In conclusion, when employees are potentially exposed to Cr(VI), the exposures should be assessed by exposure monitoring and/or through the use of objective data. When conducting exposure monitoring, be sure to use the appropriate sampling and analytical method (i.e., OSHA ID-215 or equivalent) and segregate potential exposures by Similar Exposure Groups. Exposure factors such as the welding process, chromium content in the welding wire, chromate coatings on the base metal, welding rate, welding position, use of local exhaust ventilation, welding environment, general/dilution ventilation and natural air currents, and other welding (or allied processes) performed in the area should be considered when developing an exposure monitoring strategy.