An industrial hygiene exposure assessment is the process used to evaluate a person’s exposure to a chemical or physical agent. However, in order to measure a worker’s “actual” exposure, a monitor would be required to be placed in his/her breathing zone each and every day, which is typically cost prohibitive and time-consuming.

Since it is often impossible (or not practical) to measure every persons’ actual exposures to the chemical or physical agent, judgments regarding the acceptability of exposure are usually made based on an estimate of the person’s dose via representative sampling. However, the exposure assessment strategy that is employed depends on the purpose and goal of the monitoring and what the sample(s) should represent. The two types of sampling strategies to consider when planning an exposure assessment study are “worst-case” sampling and random sampling. The broad difference is that “worst-case” sampling involves more subjectivity than a random sampling approach.

In “worst-case” sampling, workers who are subjectively believed to have the highest exposures are non-randomly selected. If no “worst-case” sample exceeds the occupational exposure limit(s), we can be subjectively satisfied (but not statistically confident) that the exposure profile is acceptable. For example, plant operators who have similar job duties within a production unit of a plant may be identified as a similar exposure group (SEG). For such workers, a “worst-case” exposure might occur on a day that their process unit generates the highest production output. Such a day would subjectively be considered the “worst-case” exposure period and targeted for evaluation.

A random sampling strategy requires workers within a SEG and the sample periods to be randomly selected and subsequent statistical analysis of the exposure data. Decisions on the acceptability of the exposure profile can then be determined with a known level of confidence based on the central tendency and spread (or dispersion) of the sample distribution. Some applications of a random sampling strategy include the following:

However, because our judgment is usually not as good as we think, “worst-case” (i.e., judgmental samples) are likely to contain our own built-in biases. As a result, there is no way to measure the accuracy of “worst-case” samples (Albright, Winston, & Zappe, 1999) and the conclusions about exposure include potential biases of our judgments on the conditions of the job, work practices, and/or other conditions that we believe have an impact on exposure. On the other hand, random sampling
of exposures eliminates such biases since samples of the population are selected via a random mechanism. As a result, the variability in the data (due to work practice variations between workers, day-to-day variations, process variations, etc.) is measured and used to estimate the exposure parameters. Thus, a random sampling strategy is based on an objective analysis of the SEG. Figure 1 provides a comparison of a “worst-case” sampling strategy versus a random sampling strategy .

With the availability of computers and statistical software programs available today, much of the statistical “grunt” work can be performed for us making it easier to employ a random sampling strategy. However, there are some statistical terms and considerations that should be understood, which are briefly described in the following 8-step process to exposure profiling.

To illustrate a random sampling approach, two case studies are described below. One describes how to evaluate the exposure of a single worker using a random sampling method. The other involves estimating a full-shift TWA based on random short-term samples.

Example 1: Estimating the Long-Term Exposure of a Single Employee

An employer requested to evaluate a particular employee’s 8-hour TWA exposure (in relation to OSHA’s PEL) to formaldehyde during a manufacturing task. The first step in assessing exposures to environmental agents is to have a thorough understanding of the processes, tasks, and contaminants to be studied. Information may be obtained through observations and possibly the use
of direct-reading devices. Interviews with workers, managers, maintenance personnel and other relevant personnel (such as technical experts) provide an additional source of information and knowledge. In addition, a review of records and documents (including past exposure monitoring data), relevant industry standards, and/or other literature can provide some insights on the magnitude of exposures for given processes and tasks performed at the work site. In this case, the employee operates equipment that forms fiberglass-matting material that is used in building materials (such as backing for shingles). Potential of formaldehyde exposure was identified since formaldehyde was listed as a component in the resin used to bind the fiberglass matting based on a review of the material safety data sheet.

A total of five workdays were randomly selected, which represented the 8-hour sample periods. A formaldehyde monitor was then placed in the employee’s breathing zone for the duration of the randomly-selected workdays to measure the TWA concentration of formaldehyde. The descriptive statistics were calculated, which resulted in the following:

In this example, we can conclude that, with 95% certainty, this employee’s exposure to formaldehyde will be less than 0.823 ppm on any given workday. Although the mean concentration of formaldehyde (i.e., 0.624 ppm) for this employee is less than OSHA’s PEL of 0.75 ppm, the most conservative approach would be to reduce exposures to a level less than the UCL1,95%. Therefore, from the employer’s perspective who is concerned with ensuring a safe workplace, additional interventions to reduce this employee’s formaldehyde exposure are warranted since the employer cannot conclude, with 95% certainty, that his exposure is below the PEL. However, from an OSHA compliance officer’s perspective, the burden of proof is on the compliance officer to show that the worker was overexposed, with at least 95% certainty. In this case, the compliance officer would be unable to demonstrate that that the employee’s exposure exceeds the PEL, with 95% certainty, since the LCL1,95% is less than the PEL.

Example 2: Estimating the TWA Concentration Based on Random Short-Term Samples

A potential exposure of 1,6-hexamethylene diisocyanate (HDI) to painters during the spray painting of an exterior shell of an above ground storage tank was identified by the employer. Due to limitations with the selected field sampling and analytical method for HDI, the sample duration was required to be limited to approximately 15 minutes. The spray-painting task was performed by painters working from a boom-supported elevated platform. At times, two painters worked from the same platform and at other times, only one painter performed the task. As a result, a sampling strategy was developed that involved the use of both a “worst-case” and a random sampling approach. Due to the sampling duration limitations, that sampling strategy included collecting random, short-term samples from the breathing zone of each painter and to estimate the TWA concentration for the task based on the short-term samples. However, the “worst-case” exposure condition was also targeted. That is, random short-term samples were collected when both painters worked side-by-side from the same elevated platform since this condition was assumed to represent the highest exposures to the painters.

Four random, short-term samples were collected from the breathing zone of each painter (i.e., a total of eight random samples), which resulted in the following descriptive statistics:

The descriptive statistics above indicate no significant outliers in the data since the mean and median are equivalent.

In this example, we can conclude, with 95% certainty, that the TWA concentration of HDI for the task is less than 0.007 mg/m3. Since the UCL1,95% is below the PEL of 0.034 mg/m3, the exposure was determined to be acceptable from both the employer’s perspective and the OSHA compliance officer’s perspective.

It is important to note that this case study does not account for day-to-day variation that may exist since the sampling was limited to periods within a single workshift. Therefore, the results represent the TWA concentration for the task that was performed on the date of the sampling. However, this TWA concentration represents the “worst-case” condition for this task since breathing zone samples were collected during “worst-case” conditions (i.e., when two painters were spray painting from the same platform).

Historically, more attention has been given to airborne exposures than exposures to physical agents and dermal exposures. However, there are many situations in which random sampling strategies may be applied to data other than airborne samples. For some chemicals, skin absorption may be the predominant route of exposure and airborne samples would not be the most appropriate variable to study such exposures. Biological monitoring may be more appropriate to study for such circumstances.

Random sampling approaches may also be applied to physical agents. However, for noise data and/or other variables measured in a logarithmic scale, analyzing the allowable dose (i.e., percent of dose), rather than decibels, should be considered so that statistical tools can be applied to such exposure measurements. 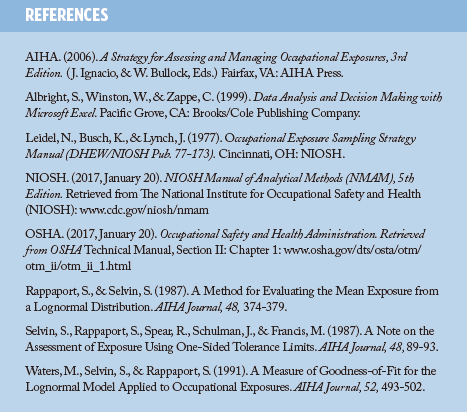